Dublin 28th July, 2009 - Today marks the launch of a landmark report, Dolphin Decides, which details the insights and findings from a unique community process in relation to the regeneration of Dolphin House and Dolphin Park in Dublin. Dolphin Decides outlines the wishes of residents in relation to how their community should be physically and socially regenerated, as well as the next steps needed to move the process forward.

"The consultation process behind Dolphin Decides represents a unique and innovative way forward for regeneration, not only of Dolphin House, but also for other community regeneration projects in the post public-private-partnership era," said Dr. Rory Hearne, Regeneration Worker, who coordinated the process". Regeneration of Dolphin House and Dolphin Park offers the potential to end a cycle of poverty and social disadvantage in this large community. The cost of investing in regeneration now is only a fraction of what the future social and economic costs of in-action would be. As Dolphin is at the heart of a key area of Dublin city, regeneration also has the potential to create knock-on economic and social benefits and job-creation opportunities for the surrounding community."

Other key findings from the report demonstrate the strong sense of community in the estate. Despite the history of neglect in the area and recent and well reported problems in relation to drug dealing and intimidation, 70% of residents want to stay in the estate and 65% of residents cited Dolphin's most positive asset as good neighbours.

The report will be launched this morning by broadcast journalist George Hook as part of the annual Dolphin House Summer Festival in the Dolphin House estate where members of the community will join with regeneration partners Dublin City Council (DCC) and the DHCDA to celebrate this first step in the process of Dolphin's regeneration.

Speaking about the event, George Hook talked about the incredible community spirit evident in the development of the report. He said, "Despite the long history of neglect and exclusion that has beset this estate, the residents of Dolphin House and Park have demonstrated a huge sense of community spirit and fortitude in the face of adversity. I am delighted to help launch this report on their behalf. I am also inspired by their ability to overcome obstacles to create such an inclusive and progressive plan of action for their community and their futures."

"The Dolphin Decides report details the next steps that are crucial to ensuring this plan continues towards completion with the same momentum as the development of the report" said Jim Lawlor, Chair of the DHCDA. Mr. Lawlor continued, "We must together ensure that the momentum is maintained. The urgent and critical changes that are needed for children, adults, families and older people on the estate must be given the best possible launch pad so that action can happen despite these difficult economic times. This is also a noble aspiration of Dublin City Council and indeed a core duty."

"The Department of the Environment, together with City Council must now without delay, ensure the residents' needs and vision outlined in this document become a reality. Together, in partnership, there is no reason why Dolphin House and Park should not become the sparkling new model of successful regeneration for the nation," Mr. Lawlor said.

John Tierney, Manager Dublin City Council, commended the communities on the inspirational process behind the report saying, "I would like to congratulate the DHCDA on the innovative approach to the consultation process. I believe this process could be used as a template for future consultations on regeneration projects. A Project Architect will be assigned to Dolphin House in the autumn of 2009 to develop a master plan for the area; the Dolphin Decides report will be of major assistance in developing this master plan."

Crucially the report found that social regeneration is as important as physical redevelopment. Speaking on behalf of the community of Dolphin House and Dolphin Park, Jim Lawlor, Chair of the DHCDA said, "The lesson from other communities is that a vital Social Regeneration Plan must be developed immediately. This plan must build on and support the many services operating in Dolphin. They represent crucial supports for local people to better themselves and their community, build their life choices and provide family and estate-wide protection against the recession. This planning must start from day one and not be sidelined until physical regeneration commences."

Veronica Lally, a local resident on the community regeneration committee said, "I hope that the report is implemented. I really hope that this time we are not let down. I look forward to working on the regeneration. I hope that our dreams that are outlined in this document come true." 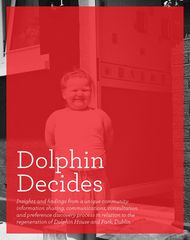 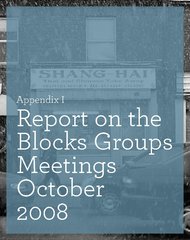