In 2008 the Dolphin Decides consultation was carried out on the basis of the Sheridan Woods and Dublin City Council proposals for Regeneration. An extensive award winning process involving public meetings and door to door surveys led to the clear conclusion that a majority of residents want to stay on the estate but also want significant regeneration. However, the collapse of Public Private Partnerships (PPPs) around this time meant that the hopes of the community for regeneration might be crushed. A Human Rights Campaign focusing on the conditions in Dolphin House for many residents helped highlight the need for regeneration and Dolphin Alliance continued to work with Dublin City Council under the auspices of the Joint Regeneration Board to continue to develop a Masterplan for the estate. Any new plan would not be the same as that proposed by Sheridan Woods as that was based on a PPP model. However, the Regeneration Board Design Group, consisting of our Residents Regeneration Design Group and Dublin City Council Architects, developed a phased Masterplan involving part demolition and part refurbishment of the estate in line with residents’ wishes and the possibilities available within public policy and finances.

This Masterplan was judged by the Residents Regeneration Design Group to be fit for consultation. The plan was given approval at a meeting of Dublin City Council on 17th July to be sent forward for Planning Permission2.

In October 2013, the Residents Regeneration Design Group with support from the regeneration worker and some local community workers formed The Dolphin Regeneration Group to co-ordinatea full consultation on the lines of Dolphin Decides.

We are delighted to report that thanks to the hard work of our community worker Debbie Mulhall and a team of volunteers and community workers, we have completed the consultation. This is a landmark moment in the history of our community. As you will read, Dolphin has decided again to sustain our wonderful community with a much needed regeneration. Long days of hard work remain ahead. While the plans are endorsed, we are determined not to leave the many concerns of residents unaddressed, but to keep the community together through the coming decade of change. 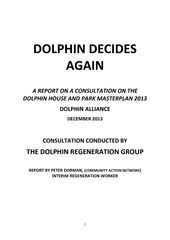